Head Coach Schuyler Biltz returns for her fifth year as Ridgetop coach! Schuyler joined the RT swim team in 2005 as a pre-teamer and has swum every season since. On top of her numerous Ridgetop Top 10 swims, Schuyler has annually received end-of-the-season awards, including nine High-Point awards, and currently holds 14 team records (7 individual, 7 relays). Beyond her numerous swimming accolades, Schuyler has been a model Ridgetop swimmer: she was the 2014 recipient of the Holland Award, our team’s highest honor. She is a rising senior at Virginia Tech.

Assistant coach Sam Smigel is returning to Ridgetop for another year! She worked with the team last year for the first time and is excited to come back for another season! Originally from South Carolina, Sam was the assistant coach for James F. Byrnes High School for four years. During that time, she was also coaching the Masters swimming group at the Middle Tyger YMCA. She has coached summer league teams and taught swim lessons since 2007 and has been swimming competitively herself since the age of 6. She currently teaches 3rd grade at Tuckahoe Elementary School. 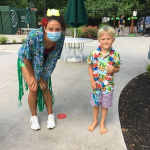 Assistant coach Madeline (Maddie) Andrews is returning for her second year as a Ridgetop coach! Maddie joined the RT swim team in 2008 and has been in every season since. She graduated from Douglas S. Freeman High School in 2019 and is a rising junior at Roanoke College where she studies International Relations. Maddie is also a part of the Roanoke College swim team where she holds the 200 backstroke record. She has been working as a lifeguard at Ridgetop for the past three years and is excited to return to the coaching staff and begin to teach lessons.